This is Crissi Untangled, a curly girl’s choice to show up in the world. 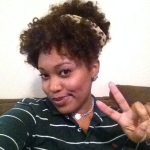 I’m Crissi (short for Crissinda) and I’m an Atlanta-based writer. This blog is my brainchild and it exists to stop me from allowing self-doubt to cripple me, internalizing my thoughts and sitting on my words, so I’m compelled to create as I was put here to do.

I’d love for you to join me on this journey. Hopefully there’s something in it for you, too.

Crissi is a graduate of THE University of Georgia — Go Dawgs! — with a magazine journalism degree who has been writing since she could hold a pen steady between her fingers. Her work has appeared in several online publications including Audacity to be You(nique), 4c Hair Chick, Brown Girl Bloggers, For Harriet, the Women’s Media Center and

LikeTheDew.com. She is the founder, editor-in-chief and publisher of The Release, a digital literary magazine that recognizes the importance of self-expression through creative writing. Crissi is also a natural hair enthusiast, who carries out that title by binge-watching YouTube tutorials and attempting styles — at varying levels of success — in between her dependence on box braids and rope twists.

Have post suggestions? Want to work with me? Message me: crissi@crissiuntangled.com.

2 thoughts on “About Crissi Untangled”

Would love to hear your thoughts Cancel reply