Another black man has been taken from us. Another victim of gun violence perpetrated by the very “public servants” who — we’ve been told countless times — are put in our communities to keep us safe.

But that’s where our optimism for and understanding of modern American society keeps failing us. Law enforcement officials and the departments they belong to aren’t in our communities to “protect and serve.” They’re placed there to maintain the strongholds of institutional prejudice and racism, to incite fear and to play God, picking us off one by one and not giving a damn who documents it because, their freedom won’t ever be compromised. All of this, while our freedom is confiscated everyday.

“Our mere existence in this country is grounds for our extinction.”

It’s infuriating that a white man can wave a loaded gun around, pointing it at authorities and whomever else he pleases and live to tell the story, while a little black boy can’t play with a toy gun — as little boys do — in a park without losing his future.

It’s maddening that a white man can murder a group of black parishioners in a house of worship that welcomed him with open arms and manage to see his day in court, but a black woman never made it home after attempting to exercise her rights during what should’ve been a routine traffic stop.

Our mere existence in this country is grounds for our extinction. Nothing we do seems to be enough to change that. I’m so tired of these bigots and bullies working overtime to belittle our worth and break our spirit.

I don’t have the answers for how to fix this. I don’t know if this is something that is solvable. But I do know although every ounce of praise and adoration we give ourselves is met with resentment and resistance, we must continue to celebrate and uplift each other through this dark present.

Many of us have been envious of another naturalista’s curls at some point on our natural hair journey. It can be challenging to let go of that envy, which is why we’re sharing a few tips on how to overcome those negative feelings and cherish your own strands.

Be mindful of your social media intake 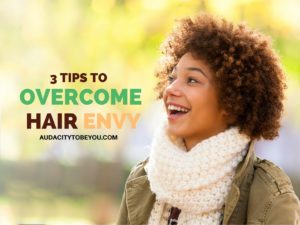 One of the great things about living in the digital age is that social networking sites such as Instagram, Pinterest and Twitter allow naturalistas to easily connect with and celebrate each other through photos, videos and other types of content. This is no doubt a gift, but it can also be a curse.

Continue reading my post on Audacity to be You(nique).